Down to the Last Drop

There is always a fight for the soul of man. Our soul is always thirsty; looking for something to satisfy. When the soul is outside of God’s will, it will seek water from all kinds of toxic wells.

God is the one who gave us the spirit of life, and He wants us to drink from Him as the source of living water. As I look at this world, I see how difficult it is for all of mankind, because they think their only potential water sources are what they see around them.

In Jeremiah 2:13, the prophet speaks about two evils:

“What fault did your fathers find in me, that they strayed so far from me?…

“My people have committed two sins: They have forsaken me, the spring of living water, and have dug their own cisterns, broken cisterns that cannot hold water.” (Jeremiah 2:5, 13)

What happens to people who dig and dig, plan and build, run to achieve, look to each other for satisfaction, look to politics for solutions and look to peace agreements for security?

Their soul quickly runs dry, finding itself far from the promises of God, drawing from an empty well.

When Elijah stood on Mt. Carmel after three and a half years of drought and famine, it was time for the rain to come. It was time to stop the idolatry. Time to look to the real source. Time for the king and the people to see who the real God is.

After Elijah’s prayer, a cloud appeared from the West coming toward the Carmel coastline, carrying water – rain for the dry land. What a victory, what an amazing moment it was to see this water falling on the earth! However, at the same time, Elijah was broken because he could see that the heart of King Ahab had not changed. When God looks over the earth, He is searching for a people with a heart toward Him. The people are His creation, His beloved and He waits for the moment when they will turn their eyes toward Him and soften their hearts.

In John 7:37-38, Yeshua proclaimed from the temple during the finale of the Feast of Tabernacles: “Let anyone who is thirsty come to me and drink. Whoever believes in me, as Scripture has said, rivers of living water will flow from within him.”

When the soul meets its creator and trusts the Lord, then it meets the source of living water and it fulfills its destiny here on earth.

We, whose eyes the Spirit has opened, are called to be priests of the Lord in every area where He puts us here on earth. We are called to intercede, to witness and to reflect the source of living water so that every soul will have the opportunity to connect to its creator and be satisfied in Him.

“As the deer pants for streams of water, so my soul pants for you, O God.

My soul thirsts for God, for the living God. When can I go and meet with God?” (Psalm 42)

A Ride on the Other Side…

For we do not have a high priest who is

unable to sympathize with our weaknesses,

but we have one who was tempted

in every way that we are, yet was without sin.

Let us then approach the throne of grace with confidence,

so that we may receive mercy and

find grace to help us in our time of need.

Most of us in our everyday lives tend to “stay in our own lane.”

When you have the chance to take a ride on the other side – it is sometimes surprising the things that you see. But how often do we really stray from the automatic pathways that make up our everyday lives?

This summer I have had the chance to step out of my regular routine and see some scenes that I don’t normally witness.

My recent rides on the other side

A few months ago, we found ourselves as a family near one of the most luxurious neighborhoods in Haifa. Just for fun, we drove through some of the streets, looking at the gorgeous houses and their sea view, oohing and aahing, pointing out special entryways and fancy cars.  As we returned home, the GPS navigator took us, via a different route, through another small town. It was notable and strange to pass through what was clearly an area of underprivileged population in government housing so very close to the fancy neighborhood we had just toured.

Many elderly were on the bus that I rode on. Recently a law was passed that public transportation over age 75 is free. I was glad for them that they had the option, but couldn’t help feeling sorry for them as they went through the tiring efforts of getting on and off, electronic payment and then finding a seat – with their shaky limbs. I tried to imagine my parents riding and felt even more sympathy and even worry for the senior citizens, many of them new immigrants, who were with me on the bus. 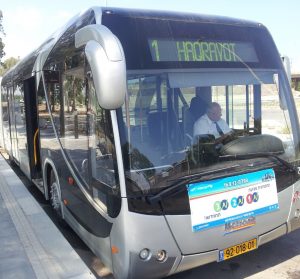 Abruptly, about 15 minutes into the ride the bus driver had to brake and suddenly I heard a loud THUD behind me. I turned around to see that an old man had lost his balance, flew across the bus and knocked into the door. He had apparently stood up to prepare to get off at the next stop, lost his balance and fallen, knocking over another not-quite-as-old man; and they both fell to the floor! From my seat in front of them, I mentally calculated if I should jump up to help. Two young men were closer and quickly came to their aid – helping them up and setting them straight on the chairs and helping them gather their scattered belongings. When the old man stood up he was disoriented and had a lump on his head. The young men helped him get off at the next stop, and I couldn’t help feeling guilty over not being able to do more to help. The old man took his shopping cart and walked feebly across the bus station platform.

It was a jarring experience and made me think about how there is a whole other side, a world of people that I don’t often see or interact with.

In November, we are again facing elections after only a year and five months of the current government. That is the 36th government of modern Israel in only 74 years and is due to the delicate nature of our parliamentary coalitions. As in every society, the politicians jockey amongst themselves to show the voting public how much they supposedly know and understand the problems that the common citizens are facing.

It seems an impossible task, trying to assess which politician to vote for, which one has a good chance to put together a government, which one will have the guts to do what needs to be done to steer our country in the right direction and the integrity to stand up for their convictions, even in the face of corruption. And as we watch our own political and national scene with concern, we are also painfully aware of the political unrest, social injustice and war that continues to rage in other national arenas. It’s safe to say politicians everywhere should focus less on their re-election and more on the everyday existence of the “little guy.”

We, as believers, should also increasingly sympathize with the difficult stories in the lives of people around us – whether family members, neighbors, friends, congregation members or even strangers in our path.

The Bible explains how God came down from heaven to take “a ride on the other side,” taking the very nature of a servant, in human likeness, so that He is fully acquainted with all of the trials we experience as humans and with that full knowledge, offers us full grace.

He is merciful and tender toward those who don’t deserve it;
he is slow to get angry and full of kindness and love.
He never bears a grudge, nor remains angry forever.
He has not punished us as we deserve for all our sins,
for his mercy toward those who fear and honor him
is as great as the height of the heavens above the earth.

He has removed our sins as far away from us as the east is from the west.
He is like a father to us, tender and sympathetic to those who reverence him.

For he knows we are but dust and that our days are few and brief,
like grass, like flowers,
blown by the wind and gone forever.

But the loving-kindness of the Lord is from everlasting to everlasting
to those who reverence him;
his salvation is to children’s children of those
who are faithful to his covenant and remember to obey him!

We at Tents of Mercy send you greetings – may you know the heavenly Father’s mercy and His grace!

A Lesson I Learned from My Grandson

We are creatures of habit.

Sometimes, after we have tasted the blessings and grace of the Lord, we become accustomed to them and forget the “garbage heap” from which we were extracted, and the light of God becomes something ordinary for us.

Then, a list of temptations can pop up as we are tempted by the world, the flesh, and the devil. That’s why it’s important to be on the alert and to triumph over them.

“Therefore, rid yourselves of all malice and all deceit, hypocrisy, envy, and slander of every kind. Like newborn babies, crave pure spiritual milk, so that by it you may grow up in your salvation, now that you have tasted that the Lord is good.” (1 Peter 2:1-3 NIV)

Peter writes this warning to believers. He provides a list of temptations that attack us when we are complacent. Malice, deceit, hypocrisy, envy, slander, and gossip can all destroy the Divine life.

Peter’s solution is to become “like newborn babies craving pure spiritual milk,” that we may grow.

I have a grandson a little over one year old. Every time I see him, I am simply amazed at how dynamically small children grow and develop compared to adults. It seems like only yesterday he was still crawling. Today he can run around the room without stopping, launch a smartphone app and do all sorts of complicated things.

Don’t get lazy! We have an obligation, as part of our birthright, to continue to grow up in our salvation as spiritual creatures and children of God. Just as my grandson is constantly reaching for new skills, God beckons us to continue growing in the likeness of Messiah’s character. Even today, 2000 years later, Peter’s shepherd’s heart still calls us to feed and grow as a flock. It reminds us of a shepherd taking his sheep up to higher and greener pastures on the Mountain of the Lord.

Now is the time to reflect, to rid ourselves of these footholds, and to rebuild. This topic is relevant for everyone who wants to grow up in our salvation, to ascend, to stand in the Light of the Lord, and to help others find the grace of God in Yeshua the Messiah.