The Lion Who Roars 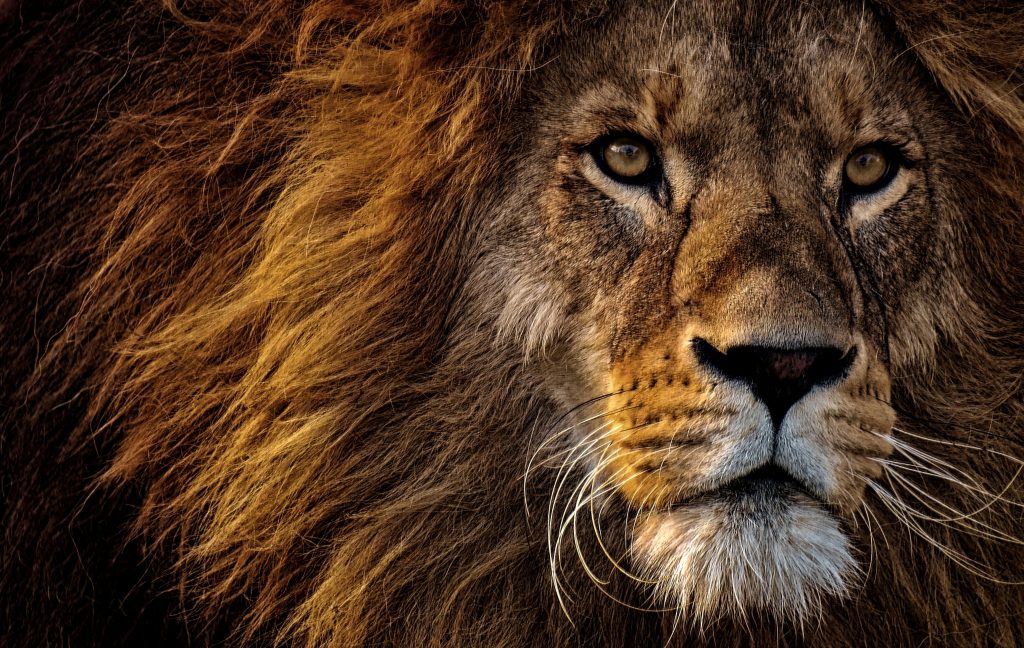 We’ve all had those embarrassing moments when you type out a message on your phone and push send, only to find that the auto-correct has changed the intended message to something ridiculous, or worse, something embarrassing.

The other day I was typing a message which included a street name. The name of the street translated literally is the Roaring Lion “הארי השואג”.The auto correct changed the word Roaring to Worrying, “הארי הדואג”.

When I reread the message, luckily I found the mistake; I have learned to reread my messages from one too many mistaken messages sent out without a proofread. I corrected the mistake which would have otherwise made it problematic for the recipient to find the correct address. However, the auto-correction stuck in my mind.

I had often wondered what the background of that street name was. Many streets in Israel are named for famous people in Jewish and Israeli history: Einstein, Weitzman, Ben Gurion… There are also street names from nature: trees, flowers, mountains… But this name sounded almost Biblical in its reference. My immediate association was to the Messiah, as He is the Lion of Judah, and He is a Roaring Lion, most certainly NOT a worrying lion.  I went to Mr. Internet to find out the rest of the story. 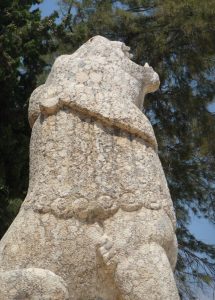 After doing some research in Hebrew and English, I learned that the “Roaring Lion” is the name of a memorial statue at the burial site of Tel Hai close to Israel’s Northern border. Turns out this is an historical location my family has visited, and I was even superficially aware of some of the history. But that autocorrect “blooper” had left me thirsting for deeper understanding.

The statue stands watch over the graves of six brave settlers who lost their lives in the Battle of Tel Hai in 1919. Among them was Yosef Trumpeldor, one of the classic heroes of Israeli modern history. Trumpeldor was a Russian-born Jew who served for almost a decade in the Russian Army. After losing his arm in one of the battles and subsequently returning to the front lines, he was decorated for valor and bravery. He was later taken as a war captive and was held along with other prisoners of war in Japan. 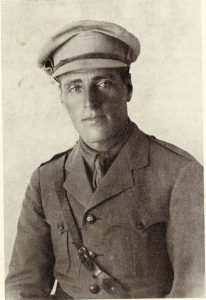 Throughout Trumpeldor’s entire outstanding military service in the Russian army, he was dreaming, thinking, and strategizing how to advance Zionist ideas and strengthen the community of pioneers settling Eretz Israel. In fact, while in captivity in Japan, he even started a Zionist organization called “The Captive Sons of Zion in Japan.” After he was freed from captivity, he made aliyah, immigrating to the Galilean region of this land while it was still under Ottoman rule.

It is notable in my opinion that while serving someone else’s vision and agenda with excellence, his heart and mind were busy with his life’s passion – a Jewish homeland. Together with another Israeli hero, Ze’ev Jabotinsky, they formed early paramilitary groups that would eventually become the Israeli Defense Force. Even with all of his military success and prowess, Trumpeldor died tragically in a battle that basically broke out due to chaos and confusion (you can find the full story online). On his deathbed, he is credited as having said “It is good to die for our country.”

The artist who was commissioned to make the memorial statue at Trumpeldor’s grave, chose the image of a lion, the symbol of Judah, the tribe of Jewish royal lineage, from which come both King David and King Yeshua. The lion is posed with his head facing up, mouth wide open in a grievous roar. It is a haunting image – the strong royal animal, roaring in grief over the precious fallen, and I can’t help but return to my original thought of who the roaring lion was supposed to be

In these past days, chaos has exploded all over our tiny country. Terrorists are launching rockets from Gaza towards dozens of Jewish and mixed Jewish/Arab towns all over much of Israel. The country is under attack. The news channels report nonstop on the tension on our borders and in our cities, problems, destruction and lives lost. We haven’t even had a chance to fully come out of Corona restrictions and now this! We believe in a Jewish homeland, but we also believe in peaceful and mutually respectful coexistence with Arabs. To be honest, the political and national climate seems to be stuck in a tangled mess of impossibility; and as I pray, I see our Messiah, the Lion of Judah, grieving over the human state of affairs. We need Him.

While researching the story, I also became curious: “Why the Lion of the tribe of Judah?” Judah was not the oldest son of Jacob, nor the most impressive. His mother Leah gave him the name Judah to express that despite her suffering and feelings of rejection, she would praise God, saying, “This time I will praise the LORD” (Genesis 29:35). This is the missing piece of the puzzle. In Hebrew, Judah is a derivative of the root word meaning praise and thanksgiving.

Yeshua, the Lion of Judah, is the one who has the solution. He can open the seal. And we, His worshippers, if we set ourselves to praise amidst our suffering, will be partners in the Peace He brings.

Please pray with us for the Peace of Jerusalem and all of Israel!

Then one of the elders said to me, “Weep no more. Behold the Lion of the tribe of Judah, the Root of David, has conquered so that he can open the scroll and its seven seals” (Revelation 5:5).

An Expectancy of Community

Ever since I became a believer in Yeshua, I have had an expectancy of the community of faith becoming like the first century congregation in Acts 2. In such a congregational fellowship, the connection between people is not only emotional but also spiritual. There is a lifestyle of giving to, investing in, and building up one another; a lifestyle of being in partnership one with another.

The congregation we read about in Acts 2* where they “had all things in common” is not only an amazing historical occurrence, but also an indication of what can be again, both now and in the future. A primary obstacle to congregations operating in this way is the society in which we live. For the most part, our modern society is one where each person is an island striving only to make ends meet, striving only to see the fulfillment of their individual thoughts and dreams. This mentality will eventually lead to a disastrous breakdown of the human bonds God created us to have.

If, on the other hand, each congregational member stops focusing on himself and instead looks to Yeshua and to the Father heart of God, we will achieve a unity that sidesteps worldly systems and build a community that experiences breakthrough. We will rise above the mentality of this world to a kingdom-of-God viewpoint where our fellow man is truly important to us. “By this we know love, because He laid down His life for us. And we also ought to lay down our lives for the brethren.” (1 John 3:16)

We may even find ourselves thinking of others before thinking of ourselves. How is this possible? The desire to invest in the lives of others will come from within. We are the pioneers whom God wants to use to build His community on earth as it is in heaven. (Matthew 6:10)

* “And they continued steadfastly in the apostles’ doctrine and fellowship, in the breaking of bread, and in prayers. Then fear came upon every soul, and many wonders and signs were done through the apostles. Now all who believed were together, and had all things in common, and sold their possessions and goods, and divided them among all, as anyone had need. So continuing daily with one accord in the temple, and breaking bread from house to house, they ate their food with gladness and simplicity of heart, praising God and having favor with all the people. And the Lord added to the church daily those who were being saved.” (Acts 2:42-47)

Surprise Encounter at the Supermarket

Sometimes our work serving the homeless in south Tel Aviv can be intense and emotionally challenging, but I have learned that God always gives us grace to continue in the calling He has given us. He repeatedly shows us that what we are doing is making a difference. Here is an example.

Each month we prepare 1,400 hot, home-cooked meals to serve the homeless. Needless to say, I spend a lot of time in the supermarket. The past several months I noticed that a young Arab man who worked at the meat counter would go out of his way to give me wonderful service. He always smiled at me, almost like he knew me, and made sure I was getting what I needed, even if he wasn’t serving me directly.

One very rainy day in Tel Aviv, I was doing the shopping during a downpour and I practically had the place to myself. When I got to the meat counter, the polite young man was there to greet me with a smile.

“You don’t recognize me, do you?” he asked me. I told him that I didn’t. “I’m not surprised,” he replied. “The last time you saw me was a year ago. There was a rainstorm like this, and I was lying like a dog in the street. You and your people brought me hot tea, soup, warm clothes, and a sleeping bag.”

“I will never forget what you all did for me,” he said. “The love and kindness you showed me stirred some- thing up in me, and that night I vowed to get off the street.” He then explained to me how he has a daughter and that for her sake, he is making this great effort. 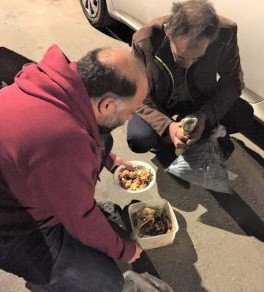 Bringing warm meals to the homeless on the street.

Bringing warm meals to the homeless on the street. Each time I go into that store, I ask him how he is doing. He is grateful for his job which keeps him busy during the week, but he said that the weekends are difficult because he is alone. Every few months he cracks and goes down to south Tel Aviv for a hit of drugs. When he shared this, I asked, “Do you remember what we talked to you about that night last year?” I reminded him that we told him about the love of God. This young man is from a Muslim background, and God is giving grace on how to share the Messiah in a way that will reach him. Please keep him in your prayers!

Praise God for His goodness and faithfulness to save the lost and to bless us so deeply by giving us glimpses of the fruit that comes from seeds of the gospel we have sown!

Thanks to your generous support, we are able to continue reaching the homeless in Tel Aviv!