Recently, on the last and greatest day of the Feast of Tabernacles (John 7), Tents of Mercy Congregation gathered together to express our thirst for God and receive his outpouring of water (John 7:38). On this same day, we also commemorated God giving us His Word. This celebration is called Simchat Torah (Joy of the Torah). 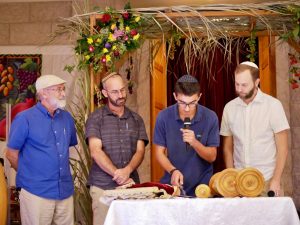 In Tents of Mercy Congregation, as in many synagogues throughout the world, a weekly portion of the Torah is read on the Sabbath through the year. Yonatan, who coordinates the congregation’s readings, relates that, “This practice is a way of making tangible the consistency of God’s word in our life.” The Joy of the Torah is the day in the annual synagogue reading cycle when Deuteronomy ends and the reading begins all over again, from Genesis 1.

Tents of Mercy has developed a tradition of having a father and son read a portion from the two sections (end and beginning). Part of the motivation is to demonstrate God’s faithfulness from generation to generation as we pass down His word, handing off the “torch.” This year not two but three generations stood on the podium as we celebrated God’s word – grandfather, father and son.

One of the things that stood out in the reading, was the overarching emphasis on God being the center of attention – both at the end and at the beginning:

“There is no one like the God of Jeshurun, Who rides the heavens to help you, and in His excellency on the clouds. The eternal God is a refuge, and underneath are the everlasting arms…” (Deuteronomy 33: 26-27 at the end of the Five Books of Moses).

“In the beginning God created the heavens and the earth. And the earth was without form and void; and darkness was on the face of the deep. And the Spirit of God was hovering over the face of the waters. Then God said, ‘Let there be light!’” (Genesis 1:1)

Generational torch to pass in the “middle”

Now let us draw a parallel between the Torah reading cycle and the broad scope of history with a beginning, middle and end. Of course, all throughout, God remains the center of attention. But, what we saw as we were standing there as grandfather, son and grandson, was that in the “middle” where we are now, our generational task is:

“And these words which I command you today shall be in your heart. You shall impart them diligently to your children, and you shall talk of them when you sit in your house, when you walk by the way, when you lie down, and when you rise up…” (Deuteronomy 6:6-7).

Let us all take this as an encouragement to impart God’s words to the next generation. This is an even higher priority than our vocational callings in the marketplace and in ministry. Parents teaching their children God’s words is central. Let us not put this off to a future time when we imagine we will be less busy and more expert, but rather, let us make even small brief steps to do this, preferably daily. – By David Shishkoff

Discipleship as a Partnership 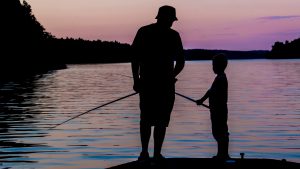 “Follow Me, and I will make you fishers of men.” These were Yeshua’s words to four fishermen who left life as they had known it and became His disciples. Discipleship is a partnership which should flow in both directions between the teacher and the student. Even Yeshua, the anointed King Messiah, needed partners to share the vision – people faithful to the call of God on their lives.

For a congregation to grow and enter into the vision God gives, there needs to be direction and following (disciples). This is true for all areas of life, even in the modern business world. There is a limit to how much one leader/administrator can carry on his or her shoulders.

Interestingly, in Matthew 4:21-22 the two brothers left their father to follow Yeshua. There is very little background given, but they most likely grew up in the family fishing business. They had employment, which if not lucrative, was at least secure. What would compel them to leave? I believe they saw Yeshua’s authority, faithfulness and anointing.

Another intriguing point to consider is the age difference between these men and Yeshua. It would appear that they were close in age, which gives us understanding that someone’s age does not necessarily determine their ability to teach, lead and be an example to others. At age 30, after being tested in the desert and withstanding Satan’s temptation, Yeshua began to gather disciples. It is important to remember that we will be better equipped to disciple others after having faced our own tests. These tests give us the ability to speak to others from our own personal experiences.

Reflecting the character of a loving father is one of the most crucial elements in discipleship. How do we see this character in connection with discipleship in the congregation? Some of the greatest obstacles can be communication and lack of trust on the side of the person receiving the investment. Yet, in spite of the obstacles, maintaining a heart to invest in others both inside and outside the congregation should be a big part of our lives.

Lastly, we must be aware of the danger of manipulating and controlling those in whom we are investing. Our purpose is not to make people dependent upon us, but to be independent in Him. People should be free to grow and develop in serving God in the gifts and calling He put on their lives. Together we are serving not ourselves but God. – by Guy Cohen

Valentina’s big family is full of love and creativity. Their home has always been filled with music, as Valentina herself plays piano and writes songs. 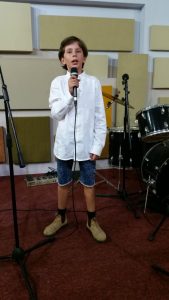 When the Lord gave her and her husband children, they believed the children would inherit a love for music and art. Their oldest son, Daniel, is 11 years old. Today he is taking vocal, violin and piano lessons in our Art and Music School “Rainbow of Sounds.” He is also gifted with theater skills, and in school he is a very good student.

It is hard to imagine that at the age of 4 Daniel had not been able to talk at all! In their attempts to help him, his parents initially took him to specialists, later to a kindergarten and then a special school for children with special needs. Daniel’s future seemed bleak, as if he might remain on the sidelines of life, among those who are called losers and disabled. But the Creator never puts a mark of shame on His creatures.

Then one day Daniel sat down at the piano and began to play, note by note. As he started to learn, he overcame his shyness and psychological complexes! Prayers, the support of loved ones, and creative passion all helped him grow and flourish. For Valentina’s big family every penny is dear, but parents know that investing in the future of their children pays off and “Return to Zion” has a sponsorship program that is helping this family and others. Now Daniel and his younger brother are already performing in “Rainbow of Sounds” concerts, and Daniel’s future looks completely different from before.

The Lord has poured out his blessing!

“Therefore, if any man be in Messiah, he is a new creation. The old things have passed away. Behold all things have become new” (II Corinthians 5:17).

Life, with its ups and downs, its burdens and blessings, poses this question time after time:

Can I really start over again?

Not always. What was said out loud can’t be taken back. If I missed a turn, I have to find another route. If I forgot a special day, or didn’t return a call – all I can do is apologize. At 71, many of life’s lessons leave me humbled and admitting that I’ve got a lot more learning and changing to do.

But, in many ways, we are promised a new start. He who sits on the throne says, “Behold! I make all things new” (Revelation 21:5). Yeshua came to make me new – so dramatically that it’s called a new BIRTH.

“…the old has passed away, all things have become new” (II Corinthians 5:17).

“…forgetting what is behind… reaching forward for the upward call of God in Messiah” (Phil 3:12-14).

A Murderer Starts Over

Wait a minute! These two quotes are from a man who was responsible for the murder of one of God’s most righteous servants. Stephen’s execution took place under the authority of Shaul (Paul) in Acts 7:58-59. How did the rabbi who became an apostle feel about that after he came to faith? I’m guessing he sorrowfully regretted it many times in his mind.

This same man, potentially paralyzed by his past, relates God’s response to his struggle: “My grace is sufficient for you…” (II Corinthians 12:9-10). He started over and impacted his world by overcoming the past. (See Acts 9:20-22 and the rest of Acts!)

What’s in your past that you desperately want to get past?

Is it a hideous self-image? Yeshua made lepers clean!

Is it a hopeless physical limitation? Yeshua gave sight to the blind.

Is it lifeless religon? Yeshua offered new birth to Nicodemus, a member of the Sanhedrin.

Is it sin? What about the woman at the well?

An Adulteress Starts Over

Yeshua gave a new start to a woman with a shameful past. She had five husbands, and the one she was with wasn’t her husband! Yet Messiah met her in her failure and brokenness with the promise of a new start. He offered unending water for her parched soul.

Can we grasp the wonder that Yeshua really did come to make all things new? The way He transformed the Samaritan woman is the way He wants to work in your life.

First, to START OVER you must come to Yeshua in your thirsty condition. That incident in John 4 was a divinely designed encounter! He is waiting at the well for you! God’s plan for you is much more than survival. He came to redeem your past, not for you to be stuck in it.

Secondly, to START OVER you must know who you are. After meeting Yeshua, the woman at the well changed an entire city. A huge part of my being fruitful is knowing how God looks at me, and looking at myself that way too. Then, I can give my life away, enabling others to start over too. In both Romans and Galatians, Shaul states clearly that we are no longer slaves, but sons and daughters (Galatians 4:6-7 and Romans 8:15-17).  We may know and agree with this theologically, but has it got down into our heart’s self-view?

When I look in the mirror what do I say? Do I say, “What a loser! How can that guy ever get past his pathetic flaws?” OR do I say “Oh, what a cool guy. There’s that son of God, Eitan. He’s got quite an inheritance. I see the light of Yeshua in his eyes, because the Spirit of God’s son has been sent into his heart!”

Where are you in your life journey? Looking back with regret? Needing to start over? Be encouraged. If Shaul and the Samaritan woman could start over, so can you. – Eitan Shishkoff