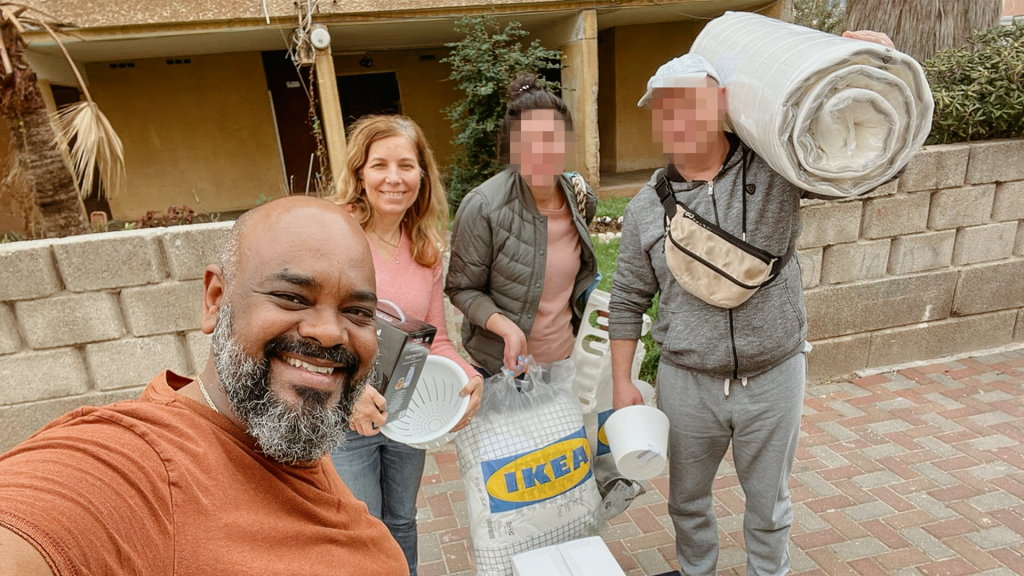 It would be hard to exaggerate how deeply the current war between Russia and Ukraine is already impacting the huge portion of Israeli society that has roots in the Former Soviet Union. To give just a tiny glimpse, here are a few everyday ripple effects on those in our closest circle.

Shortly after the war began, a dear friend of the bookkeeper at Tents of Mercy called her, crying and asking for prayer. Her daughter and the daughter’s family are trapped in Ukraine. The mom is terrified for her daughter’s life, and distraught that as the great-grandchild of a Jew and not a Jew herself, she has no legal right to immigrate to Israel.

Shelly is an English teacher in a local Israeli middle school. After the first few days of fighting, she dedicated the home-room hour to asking the kids in her class how many of them have family in Ukraine; how they are feeling about the situation and what they would like to share with the class. She shed tears as her students openly talked about their fears and concerns for their grandparents and some even for a divorced parent or half-sibling who remained in Ukraine.

Our son returned home from school yesterday and said that one of his best friends (Russian-born) was explaining that his relatives had described how Russians were supposedly ill-treated and discriminated against in Ukraine. In a casual conversation among the friends, a diverse group (including at least 3 Russian speakers) of Israeli 8th graders were discussing the claims of both Ukraine and Russia.

it seems hard for many among the older generation to conceive of Russian leadership being in the wrong.

Millennial husband and wife, Lilly and Sasha grew up in Israel. She just discovered that she is half Ukrainian. She grew up knowing only about her roots in the area of the Republic of Georgia, just south of Russia. He left Ukraine as a child, but can still understand and speak viable Ukrainian. They, like so many in our community, are heart broken and struggling to process the reality of what their friends and family in Ukraine are experiencing. Sasha will shortly be joining a delegation of believing Israelis serving on the Hungarian border of Ukraine to minister practical help along with a smile and prayers for comfort and hope.

There are so many other stories. This is just a tiny sampling.

We are honored to be a recognized humanitarian aid center that offers first line assistance to those in need. Local Israeli agencies and welfare offices have come to rely on us to regularly provide food, clothing, furniture, and more. Now Ukrainian refugees are being referred to us for help.

One of the families that came the day I wrote this article was completely moved by the kindness that they were met with at Tents of Mercy. Overwhelmed with gratitude, they both said how eager they are to come back and help pass on the kindness as soon as they are settled.

And what about the rest of us?

When crisis rages all around us, when people around us are lost and hurting or threatened by seen or unseen enemies, how should we respond?

Even as this war tragically drags on, we are now celebrating Purim, the story of a dignified and beautiful queen who sacrificed her own security in light of a vicious attack on her people. In that moment in time, she rose to the occasion, endangering her very life, to stand in intercession, in advocacy, and in leadership.

In the upcoming biblical spring feast of Passover, we see how God used Moses, another weak and frail but willing human being, to deliver the Israelites out of Egyptian slavery.

Our great and awesome God, who called the universe into being, chooses to use human beings as agents of salvation. The Bible is full of stories of His partnership with us.

And as we look again at the pattern the feasts set out before us, we recognize our modern reality, and the actions of our Biblical heroes paving the way for our own response as we assume an attitude of intercession and get in sync with the plans of God.

How do we do this?

Firstly, by being ready to live radically and sacrificially. Esther took a stand for her people even though it meant jeopardizing her comfortable position in the King’s palace.

Secondly, by interceding. Intercession is the act of spiritually coming before the King on behalf of another. But it can also be a physical intervention to bring help or assistance.

Mordecai challenged Esther with these words : “For if you remain silent at this time, relief and deliverance for the Jews will arise from another place…”

In this season may we all be equipped in our spirits with the traits of sacrifice and intercession, so that we may lead, serve, and give in the situations before each of us – individually and corporately.

In the midst of these difficult times, God is still in control! He is like the chess grandmaster who knows all the moves and when to make them. God has a master plan, and it is being revealed before our eyes. The plan even encompasses things like money and food.

We read in Psalm 37:25 of God’s promise to those who are righteous. God will provide for them and their descendants. They will have their daily bread – just as Yeshua guided us to pray in Matthew 6:11, “Give us this day our daily bread.”

The night before I wrote this, I had a detailed dream. In the dream, I entered a grocery store with a long line of people waiting to buy bread in the corner of the store. I purchased three loaves, one white loaf and two brown, for 20,000 shekels ($6,000); and I gave them 5 checks in payment. Then I realized this was the wrong thing to do so I returned the bread, took back the checks and left the long line of people waiting behind me.

The exaggerated cost of bread in my dream recalls Revelation 6:6 where John heard, “A quart of wheat for a day’s wages…” For comparison, in Israel today, this quantity of wheat flour costs only a few minutes of wages. In times of desperate economic crisis, when starving, people will be willing to give their gold just for a loaf of bread.

At the beginning of Revelation 6, we see four horses: white, red, black and pale. Why is the white horse the FIRST and not the last? Our answer can be found in Yeshua’s words in Matthew 24:14. “And this gospel of the kingdom will be preached in all the world as a witness to all the nations, and then the end will come.” We are called to FIRST be God’s messengers throughout the world, preaching the Gospel of the Kingdom, reaching out in every area of need.

The red horse symbolizes an absence of peace, brother turning against brother to the point of killing each other. The black horse symbolizes economic crisis. The poor will be poorer while the rich get richer. The pale horse will herald death by sword, by hunger and by the beasts of the earth – with power over a fourth of the earth.

Where does this put us?

“Heaven and earth will pass away, but My words will by no means pass away” (Matthew 24:35). We can be assured that God’s Word will be fulfilled. He has put us here for this time, each of us according to His purpose. We are the ones who carry the Gospel, the Word of God.

One way to be God’s hand and feet is to serve those in need. Currently our congregation is working to help people affected by the war in Ukraine through a local ministry there. Here in Israel we are also working with the aliyah office to provide whatever we can for the new immigrants and refugees expected to arrive in Akko and the surrounding areas of the Western Galilee.

In these hard times let’s shine with His light. May we remain faithful as He is faithful, doing the work He has given us to do.

“Rejoice always, pray continually, give thanks in all circumstances; for this is God’s will for you in Yeshua the Messiah.” (1 Thessalonians 5:16-18)

That is an extreme commandment during tragic times, at least for me.

I was born and raised in the former Soviet Union. There I managed to complete school and university, and spent two years in the Soviet Army (in a tank repair battalion in Siberia, not far from Khabarovsk and the border with China) before immigrating to Israel.

Even though the Communist Soviet Union broke apart in 1991, today’s Russian military mindset is not much different from that of its Soviet predecessor, which was “victory at any cost” – with a single soldier’s life being valued less than a Kalashnikov assault rifle.

Under Soviet rule, there was little difference between Russians, Ukrainians, Belarusians, and the other Soviet nations. Only Jews were kept at a distance (due to the lingering effect of Slavic anti-Semitism).

Now I watch with horror as Russia bombs Ukraine in what appears to be an all-out invasion. Before February 22, such an act was unimaginable – something I never dreamed could happen, even in my worst nightmares. It is clear that the ruling elite only care about solving their imperial “problems,” while the common citizens pay the price with their blood. I feel this problem so viscerally, that I cannot adequately express it in a page of text.

A “War-Cry” for Prayer

Dear friends, our most powerful weapon in times like these is prayer. I exhort you to “pray without ceasing” (1 Thessalonians 5:17). Ask the Lord God to stop this senseless war of ambition. Pray for those under attack. After being an Israeli for the last 30 years I know the feeling, having experienced three wars here. Yet, the One enthroned on High hears our prayers… Let us storm heaven with our requests!

The Jewish Kaddish prayer says, “The One who makes peace in His lofty heights, He will make peace over us…” May He bring peace to Israel, peace to Ukraine and peace to Russia.