“Then Joseph could not restrain himself…and he cried out ‘Make everyone go out from me!’ And he wept aloud, and the Egyptians and the house of Pharaoh heard it. Then Joseph said to his brothers, ‘I am Joseph; does my father still live?’” (Genesis 45:1-4) 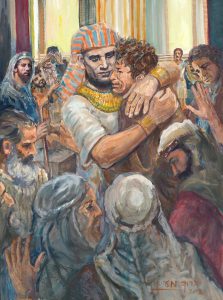 This is one of the most gripping moments in all of Scripture. Not just this once, but seven times in Joseph’s emotion-packed story the depth of his emotion is expressed in tears. For sheer *pathos it’s hard to find a family narrative more touching than that of Joseph, his father, and his brothers.

In their story, God is making a strong statement. Is there a message for us in Joseph’s piercing cries? Was he merely releasing the floodgates of frustration and hurt, or is there added meaning – hidden value – to these seven instances of his heart leaking through his eyes?

Here is a powerful man, the prime minister of the Egyptian Empire. In the first encounters with his brothers coming to get food during the famine, they had no idea they were dealing with the brother they’d sold into slavery twenty-two years before. The first time Joseph wept, moved to see them after so long, he did not want to be seen. Weeping openly would not befit his position. Nor did he want to reveal himself as their brother – yet.

To test them, he put his brothers through nerve-wracking accusation, allowing them more than once to fear the uncertainty of their fate in his hands.

What told Joseph that his brothers finally “got it?” Perhaps it was Judah’s selfless offer to be a sacrifice in the place of young Benjamin that broke open the fountain deep inside Joseph. For at this point he at last wept before them openly.

What is leaking out of his heart, through his eyes? Love, longing, lost years. He’s forgiving them, amazingly! It is the power and grace of God being played out on the stage of a very flawed, yet destined family. Joseph had already achieved greatness, yet this weeping signaled the healing of his family – and prepared the way for Israel’s national history, leading to Messiah’s redeeming the world as the promised king from the tribe of Judah. (For a stimulating examination of the dysfunctionality and eventual healing of Joseph’s relationship with his brothers and his father, I highly recommend Russell Resnik’s book, A Life of Favor, Lederer, 2017).

What awaits you and me – that can only be fulfilled when we have born the wounds of life, faced our pain, and summoned the courage to forgive and release?

Weeping Over Relationships and Emotional Health

Have you ever wept over a relationship? I have. Relationships are the stuff of life. They can be exhilarating and unnerving, deeply satisfying and dreadfully complicated. But, unless we adopt a hermit’s lifestyle, we will always be involved with people. What can Joseph teach us about relationships?

Joseph’s tale includes all of the above and more. He began with the extreme favor of his father, Jacob. That led to jealousy, compounded by his own youthful enthusiasm over his future. The ensuing series of trials tested his heart. He easily could have chosen bitterness and enduring anger. I’m sure unplumbed wells of regret, loss, and perplexity lay within Joseph’s soul. But he chose to move forward, somehow placing the past on hold – hoping for a better future.

In Peter Scazzero’s insightful and challenging book Emotionally Healthy Spirituality, he reveals his own painful journey of finally facing the impact of un-dealt-with emotions. He notes “God made human beings to feel a wide range of emotions. When we deny our pain, losses, and feelings year after year, we become less and less human” (page 69).

I am a person who feels things deeply. Sometimes that’s a liability. I can get consumed with those feelings. But reading the story of Joseph, and the writings of Resnik and Scazzero, I’m realizing that everyone has deep feelings. It’s just that some of us are not as in touch with them, or live a cauterized existence. So, how can we deal with our emotions in a healthy, godly way?

Scazzero gives the following list as a starting point:

This past year has been undeniably difficult. Covid still rages. Many of us have lost loved ones. Suffering and loss take a heavy toll on us emotionally. What have you accumulated this year (or longer) in the way of emotional baggage? Can you respond as Joseph did?

Joseph wept. Jeremiah wept. Jesus wept. You don’t have to weep physically to be emotionally healthy (though it sure can help). But it should not escape our notice that these great, spiritual men (including the Son of God) expressed such depth of emotion. They did not agree with the false, damaging saying: “Big boys don’t cry.”

His brothers’ emotions are also explored in the Genesis account. Their jealousy turned to murderous resentment. Yet, upon seeing Joseph, before knowing who he was, they felt the weight of guilt and remorse for the crime against their brother. “We saw the anguish of his soul when he pleaded with us and we would not hear” (Genesis 42:21). Ultimately, when he revealed himself, they were shocked, stunned, dismayed, and at last bathed in Joseph’s tears and kisses (Genesis 45:14).

Joseph experienced decades of potentially crippling emotions. At the time of reunion with his brothers, he had traveled through rejection, bitterness, anger, loneliness, grief, sadness, and anguished bewilderment. How was Joseph able to reconcile the injustice he suffered at the hands of his brothers, with the goodness of God? This may be a question you’re asking too.

At the end of Joseph’s Genesis story he says, in effect “Even though I passed through many grinding trials after you rejected me, God was with me and even authored my journey in order to save you.” At the profound moment of Joseph’s “reveal” he reveals the mystery of his suffering. “Now do not grieve or be angry with yourselves because you sold me here; for God sent me before you to preserve life.” For emphasis, he repeats this startling conclusion. “And God sent me before you…to save your lives…So now it was not you who sent me here, but God” (Genesis 45:5,7,8, my emphasis).

*(My dear friend, artist Baruch Maayan has captured the pathos of Joseph and his brothers in the above painting which he has been so kind as to let us publish here. See more of his work at www.baruchmaayan.com)

“Yet when He heard that Lazarus was sick, he stayed where he was two more days.” (John 11:6 NIV)

Many times in our lives we can feel discouraged and hopeless. We turn our eyes to our Lord longing for His full redemption. Like Lazarus’ sisters we sometimes ask, “Where are you and why aren’t you here? When will you answer?” However, that line of thinking often brings us to a place of discouragement.

We can find ourselves in the John 11 story of Lazarus. (Please take a moment to read it now if you can.) Each of us has a bit of Martha and Miriam in our personality. We even see examples of this in how the disciples understood and responded to the situation when they thought it was good for their sick friend to “sleep” (See John 11:11-12). Our faith has borders; our understanding has limits. For example, Martha understood Lazarus would rise again in the resurrection at the last day. However, it was beyond her ability to comprehend by faith that the one standing in front of her, Yeshua, could be THE resurrection and the life NOW.

Miriam, in the midst of her sorrow, was full of questions.

Friends were mourning Lazarus’ death. Even today here in Israel there are people whose job it is mourn at a funeral. This expression of pain and grieving is good for processing, but not a good place to remain. Yeshua’s grief over Lazarus’ death was partly tied to the people around Him. He grieved with those who were stuck there in a dark corner – unable to look forward, beyond the grief and mourning – feeling hopeless and devoid of a future.

As we imagine rolling away the stone blocking the burial cave where Lazarus was laid, our first thought is about the smell of a body decaying for four days. However there are obviously a host of biological roadblocks to consider in a dead body – such as the brain, heart, lungs and other organs which have ceased to receive blood or oxygen. Then there is the cause of death. Was it a virus, cancer or other disease? When Lazarus came out of the cave, returning to life included healing and restoration of body, senses, memory and mind.

We can take this example of Lazarus coming back from the dead and use it as a parallel to those who have come to know the Lord and walked with Him for a period of time, but one day find themselves feeling like they are trapped in a dark corner or like a corpse in a cave. Some may have become discouraged. Some may have issues with other believers or leadership within the congregation. Some may have separated themselves or allowed the enemy to separate them from other believers, from fellowship and from worship in the house of God. Perhaps there is disagreement over doctrine or theology or everyday principles of living.

Lazarus’ sisters thought Yeshua was LATE in coming to help their sick brother. However, God is never late in anything. Take heart. Believe. His purposes will come to pass according to His plan and timing.

Or, as the Tomlin song goes,

“From Age to Age He Stands

And Time is in His Hands

The Beginning and the End…”

As you may already know, I come from a “Russian-Jewish” background. Growing up under Communism, I was unfamiliar with both Hanukkah and Christmas. However, the holiday celebrating the NEW YEAR still meant something to the Russian-Jewish population and even had a quasi-spiritual tone. So I want to wish you a Happy New Year with Heavenly Blessings! May the grace of the Lord Yeshua Ha-Mashiach, and the love of God, and the fellowship of the Holy Spirit be with you all (2 Corinthians 13:14).

Sadly, 2021 has not been an easy year, but rather one that held much uncertainty, hopes, fears, and illness (in my case, heavy Covid symptoms). For some, Israel’s official vaccination campaign has awoken memories of the oppressive Soviet regime. The pressure brought to bear by the authorities and hold echoes of despotism. At times there is a feeling that we are being given an ultimatum: “If you don’t do what we ask, then we will use force.”

And yet through it all, I have immeasurable feelings of gratitude to God for His abundant mercy!  And I thank my wife, children, and friends who “did not abandon me in sickness.” I received YOUR prayers, support and good wishes!!!

This year also brought me much joy:

There are many reasons for joy, and we aim for yet more!

I believe that the day is not far when the voice of God will be known to more people in Israel and in the entire world!

In the past we had countless events with large gatherings. Even with Covid we have resumed gatherings, and the quality of our times together has greatly increased!

A few questions to stimulate our thinking as we enter into the New Year:

I pray for open borders to be able to meet international friends, and a joyful 2022!

Please be in prayer for the projects of Shavei Tzion. We desire to preach to all Israel, that the Messiah was crucified for our sins and has risen for our justification. By His power may we continue to do good to all!

Peace and blessings to you and your loved ones in Yeshua Ha-Mashiach.