The Battle of Race 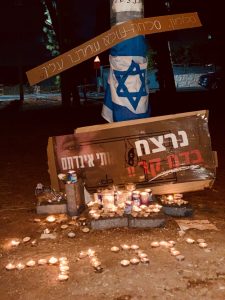 “Unarmed truth and unconditional love will have the final word in reality.” (Martin Luther King)

June 30, 2019:  “Today was a difficult day. We witnessed the legitimate rage of a community pour into the streets like a volcanic eruption. Whereas Ethiopian Israelis are typically humble, meek, and compliant, the undeserved death of 19 year Solomon Tekka, was the straw that broke the “camel’s back,” driving thousands of Ethio-Israelis to violently demonstrate and block major roads. Their passionate outcry was incited by the unfairness of the tragic loss of yet another promising son of the community.”

And this undeserved death was not an isolated occurrence. Just this last January, an Ethiopian-Israeli mother had called the police on her son who was showing mental instability. She wanted him to be taken to the hospital. Instead, when the police came, the event quickly turned into a shooting scene. The reports said that the police somehow felt threatened by this young man, causing them to pull guns and shoot at him from a distance, which resulted in his death. And now barely six months later, young Solomon Teka was killed by a police gun shot.

Even though the relationship between the police and the Ethiopian-Israeli community has been somewhat tense for years now, this last event brought the crisis to new proportions.

Being a police officer is a noble job and not an easy one. It requires a life dedicated to the well-being of others and at times disregarding one’s own safety. We need to honor the police in their spirit of service. It is also our duty as good citizens to uphold the police in our prayers. 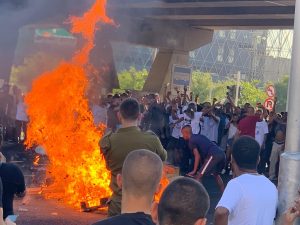 However, what we witnessed in the recent incident was a different spirit. Solomon Teka was at a public park with a group of friends who later reported that a dispute began between an off-duty police officer and a young man from the group. Solomon, in defense of his friend, joined the interaction. Very quickly, the police officer pulled out a gun while Solomon began throwing stones trying to protect himself and his friends. And then the story gets blurry as there are numerous versions of what actually happened. The end result was Solomon’s death. He was unarmed.

In recent years, 11 Ethiopian-Israeli young men have been killed at the hands of police! In all these cases, the police presented justification and defended their actions saying that they felt threatened. The chief of police added unhelpful words regarding the Ethiopian victims, saying that “…it’s only natural that they arouse suspicion,” thus pushing further away any attempt to bridge the gap.

Members of the Ethiopian-Israel community, of course, beg to differ. They contend that their young men are being unfairly handled and targeted. In their assessment, having dark skin and being male are what constitute the threat. 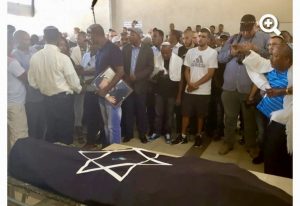 There is now a wide breach between the police officials and the Ethiopian Israeli community.

The Bible states that just as the leopard cannot change its spots, so the Ethiopians cannot change their skin tone (Jeremiah 13:23). There are things that cannot be changed, and in contrast, there are things that can and must change. Differences and diversity in culture and demeanor can’t and don’t need to change. However our ethics of prejudicial distinctions and plurality can and should be evaluated for change. If not, the gap will continue to grow as well as the incidences of violence and destruction.

Some people might think that here in the Holy Land we don’t suffer from the global epidemic of racism. I wish I could say that was true, but this problem of race and inequality is ancient. As people who believe in a Loving Creator, it is our mandate to honor and love those different from us. In the words of King Solomon, the first of the six traits that God hates is “a proud look…” (Proverbs 6:17). That is a fitting description of racism. God hates racism!

Even though political correctness may have changed the way people talk, people’s hearts still need to change through God’s intervention. A “proud look” is rooted in an insecure heart, which puts another down to justify some sense of false superiority.

The truth is that our self-value doesn’t come from the inferiority of others but rather from how God measures our worth. Until we come to that transforming encounter of God’s-esteem for us we cannot accurately view one another.

It hit me while worshiping with some 70 youth from all over Israel, at the conclusion of this summer’s Katzir-Harvest teen conference:

Identity. We all want to know who we are. But during the teen years the quest is both intensified and, at times, desperate ― even excruciating. These kids are faced with a tsunami of alternative identities. And all but one of them lead to a dead end ― even literally. The one identity, the one true person they really are, is only discoverable through an intimate, real, love relationship with their Creator ― who also redeemed each of them through the atoning power of His blood.

As these thoughts run through my mind, Joel is now closing the final message from the week-long series on the Sermon on the Mount. He’s inviting the youth forward to get rid of whatever is blocking their relationship with God: “What prevents you from knowing His love? Cry out to our Father. Tell Him ‘I want to know you, to receive your love.’ Maybe you have to give up something ― to turn from wrong acts, fleshly habits, and receive forgiveness.”

Young people one after another are coming forward to pray with their counselors. They are seeking assistance, assurance, release, renewal. I’m watching the arms of counselors surrounding youthful shoulders with assurance, comfort, encouragement…men to men; women to women. These young adult believers have poured themselves out for the kids they’ve been living with in close quarters all week long. Israelis in their 20s, they took time from work, studies, family, army service ― in the heat of summer ― to volunteer 24/7. They are the transmitters of faith-hope-love to their younger countrymen. What heroes! What a gutsy bunch! I am astounded at their depth, their sensitivity, their genuineness.

Teenage men and women hold their heads in their hands, soberly considering their lives before God in prolonged prayer. This is not to be taken for granted. All week long there have been games, meals, volunteer trash cleanup, volunteering with elderly, evangelistic outreach, a hike, praise, teaching, discussion…and now the Spirit is delving deeply into the hearts of these tender lives. What a miracle that these young people are opening their hearts in true sincerity, to draw near to God! 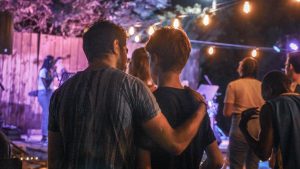 The atmosphere of seeking Him is unbroken. A timeless space…the heavens are open, hearts are open. This is what it’s all about. Take it, Lord. Continue this profound, essential, most important work ― the transforming of next generation lives ― that all Israel may be saved.

What happened in the words of Katzir youth…

“I saw Yeshua…and wept over my life.  I decided that’s it! I’m following Yeshua entirely. Katzir is a place to give Him everything.”

“I came closed. I was not in touch with God’s love. Then this morning God told me that I’m truly loved by him. It is so real!”  – EITAN SHISHKOFF

An Eye For An Eye

Recently we received a phone call from the Akko Municipality asking for our ministry to help provide back-to-school supplies for two hundred needy children. That very same day we also received another inspection of our building by the same Akko Municipality regarding property tax.

This to me was a contradiction and a paradox. Why? According to the national Israeli government’s Interior Ministry, as a house of prayer, we are supposed to be exempt from property tax. However, the municipality continues to question our status, attempting to charge us as much as possible.

In my annoyance at the city desiring to receive our help and yet at the same time charging us unlawful taxes, I found myself reading Exodus 21:23-25, “…an eye for an eye…” I wondered how I should respond according to the Word of God. My initial interpretation of this Scripture was that only if the municipality recognizes us as a house of prayer will we provide the school supplies.

Then I remembered the sentence of Mahatma Gandhi, “An eye for an eye leaves the whole world blind.” Gandhi was inspired by Yeshua’s teaching in Matthew 5:38-42. I read Yeshua’s words that “…if someone comes to take your shirt give them your coat as well.”

I felt personally convicted regarding the case of the municipality and many other areas in which we should reflect our Lord by “…giving to Caesar what is Caesar’s.” I was faced with the choice of taking out my frustration on the needy, or reflecting Yeshua.

So the conclusion to the paradox is that despite the decision of the Akko Municipality regarding our property tax we will honor their request to help the children of Akko.

These days in Israel people are more and more living under the influence of the traditional understanding of “an eye for an eye.” This is why we are seeing more and more situations here in the land in which people are responding with a spirit of revenge. The recent killing of a teenager by a policeman, and the death of a father in an argument over a parking space, are only two examples symptomatic of Israeli society being drawn towards chaos. Where do we place ourselves as believers? We all find ourselves challenged daily in our responses to various situations. Will we react with anger toward our neighbor, co-workers, etc.?

In the heat of the moment are we capable of remembering Who it is that dwells in each of us – He who gives us the grace to reflect Himself? Only with this understanding can we stand and respond, not in revenge, but in the grace of our Lord, remembering that freely we have received and freely we must give (Matthew 10:8). – Guy Cohen 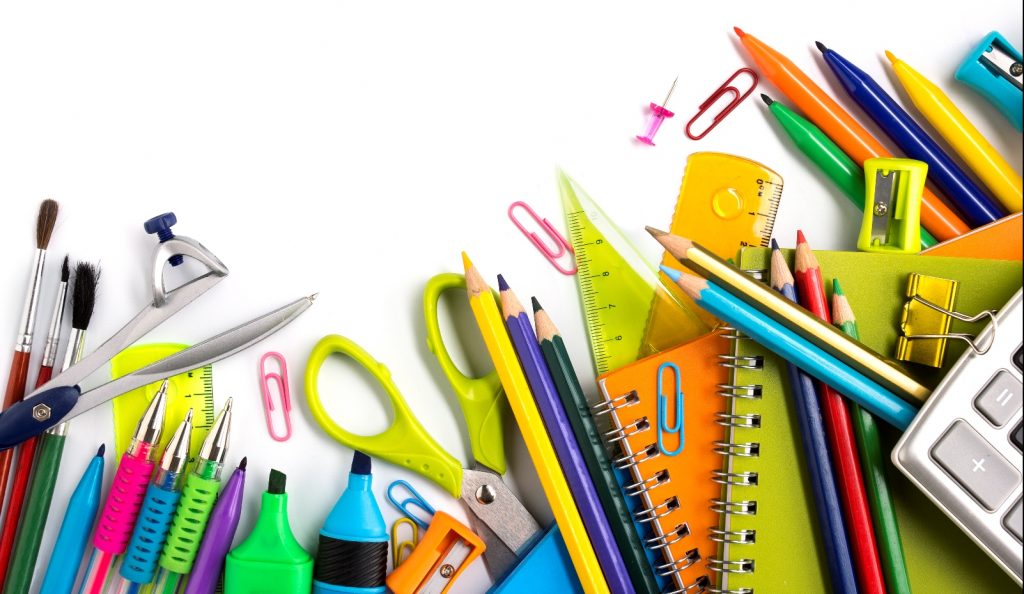