His Kingdom Came in our Midst 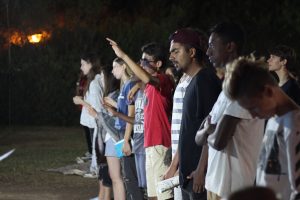 “What is the Gospel of the Kingdom?” we asked the 84 Israeli Messianic youth at the outset of this year’s Katzir (harvest) national, summer conference. Together we realized that when Yeshua said “Your Kingdom Come,” it was not mainly a reference to some future event, but an immediate prayer that His kingdom be expressed in the daily walk of the believer here on earth in very practical ways.

Our conference was held in the shadow of Mt. Tabor, which some believe was the Mount of Transfiguration. In the cool of each evening we gathered under the stars, led in praise and worship by the teens themselves. Then, into prepared hearts, speakers planted the vibrant seed of God’s word. The response of these young people, each one traveling through his/her own challenging journey of identity and faith, was remarkable. Some came forward, lifting their arms with abandon, signaling their surrender to the Lord. Others huddled together in small groups, praying with dedicated counselors.

Getting out of our comfort zone, to share the love of Messiah is essential for all of us. But for teens, who can get selfishly caught up in themselves, it’s crucial. So, during the camp one portion of the youth volunteered in senior citizen homes and in a home for disabled children. After seeing the challenging condition of those they served, more than one young person said “Wow! I’ve never been that close to someone so helpless. I didn’t think I could handle serving them, but once I began it was incredibly rewarding. I’ll never be the same.” The other group experienced an evening of open air outreach on the beach near Haifa. The teens themselves shared the gospel in creative ways using arts, music, and “treasure hunting” (a form of evangelism focused on hearing the voice of God to direct to specific people) to begin conversations with people. For many, it was the first time sharing their faith in public. 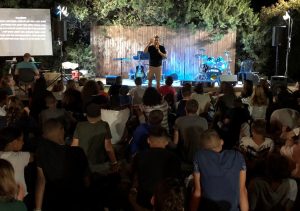 On the fourth day it felt like we hit a brick wall. After a long day of volunteering out in the hot sun, we came back to the camp grounds and faced some serious disciplinary issues. The morale of the group was deteriorating. So we decided to cancel the evening outreach and devote the entire afternoon and evening to seeking the Lord’s face. We needed God to show up; and He did! We experienced amazing breakthrough in the afternoon with many teens being touched very deeply. In the evening, the worship turned into a spontaneous time of moving testimonies and prophesying over the youth, something many of them are not exposed to very often. Chaim, our camp director, felt there was someone with pain in their leg who needed healing. He asked us to begin praying for anyone who had such pain or any other illness. Immediately after these prayers one of the young women came up with tears:  “I’ve spent the last year and a half with pain in both legs. For the first time I’m relieved of all pain!”

“To everything there is a season, a time for every purpose under heaven” (Ecclesiastes 3:1).

God planned life’s events to have an appointed time to begin and to end. Solomon’s words flow from a life enriched by many seasons and experiences.

There are four natural seasons:  Spring, Summer, Autumn, and Winter. Each transitions from one to the next. We approach the winter while still in the midst of Autumn. Such is the case with the Biblical feasts which occur during the fall season and point us towards the coming winter. Why is this significant?

In Leviticus 23:23 the Lord commanded that in the seventh month we should have a day of ceasing from our labors, a memorial day of blowing trumpets, a holy convocation. This new beginning opens with the blowing of the shofar (The Feast of Trumpets). For the next fifteen days we enter into the Autumn season of feasts including the Day of Atonement and the Feast of Tabernacles.

Toward the end of these fifteen days, we see a change in the climate in Israel, one that often includes the first rains after a long, dry summer. It was during this season in the temple times that they took water from the Gihon Spring and poured it on the altar asking the Lord to provide a good season blessed with rain.

In John 7:37-38 we read that Yeshua’s response when He saw these waters being poured out in the temple was:  “If anyone thirsts, let him come to Me and drink.  He who believes in Me, as the Scripture has said, out of his heart will flow rivers of living water.”

So these feast days are preparation for the changes ahead. We need to be ready for the new things which will come according to His will.

Here in Israel for the last five years we have suffered from a lack of rain. The Sea of Galilee is drying up. Recently we went there to baptize some people from the congregation. I was struck by the dramatic difference between now and when I was a boy. I stood on dry ground in a place which once was under water.

Yes we need an influx of rain, but more importantly, just as the Sea of Galilee is dry so are the souls of those around us. They need the water Yeshua promised. Even we as believers can find ourselves in a dry season. We need to really hear Yeshua’s words, “If anyone thirsts, let him come to Me and drink.” Yeshua sees that we are thirsty and need a refreshing change. This is what Solomon is referring to–that the desert season is coming to an end. Through Yeshua we will have the water of heaven.

Harvest of Asher Congregation is also entering a season of change, beginning with this Feast of Trumpets. Since 2004 when we began with home groups I have stood mostly alone in leadership of the congregation, although I was accountable to leaders of other congregations. However, this year, in this season we are pleased to be anointing and recognizing three couples as new elders–couples with whom we have served for many years.

As we enter into this season, we do so with our eyes lifted up to the Lord asking Him to pour out His water upon us. Together may we form a river of living water for the Western Galilee, the lands of the Tribe of Asher, to which God has called us.

As a congregation, we understand that in addition to spiritual support and material help, a sense of family and home are very important for people–especially for new immigrants. That is why one of the priority areas at Return to Zion Ministry is serving the newly repatriated immigrants. At the same time, we believe that the return of the Jewish people to the land of Israel is not only an important commandment of the Almighty God, but also an opportunity to reveal to these people the light and love of Yeshua the Messiah.

In our country there is a saying, “There is no immigration to the State of Israel; there is repatriation.” That means Jewish people are not coming to a new place, rather returning home from different countries and different cultures. Israel is such a melting pot for Jews from all over the world. Each one brings his and her own culture. We consider it very important to combine a home-like atmosphere and immersion in the messianic biblical truths. 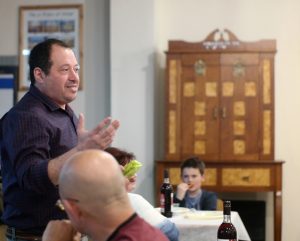 One of the latest projects in this direction was the initiative of the home groups to invite families of new immigrants for the Friday night gathering to enter into the Sabbath together (Kabalat Shabbat). At the moment, four home groups have already participated in this project. Each time they gathered several new families from their area. Soon, we will also start the Alpha Club project, planned not only to teach biblical foundations, but also to create a friendly atmosphere, giving people new connections with home groups.

Terri and I just returned from a trip to Denmark. One of the chief reasons we wanted to be in that country is because of the stand the Danish people took for the Danish Jews in 1943, at great risk to themselves, during the Holocaust.

Denmark was one of the few countries whose people refused to give in to the order that their Jews had to be sent to concentration camps to die. On midnight of October 1, 1943, the eve of Rosh Hashanah, the Nazis planned to apprehend all the 7,500 Jews of Denmark, while they were celebrating the holiday in their homes, and send them to the concentration camps. The Jews were warned, and the vast majority were not at home—they had been taken in by their Christian neighbors and friends who could have been killed for harboring Jews.

Many Danes—again, at the risk of their own lives—helped to take them secretly to coastal villages from which they could be transported on fishing boats to neutral Sweden. Seven thousand Danish Jews were rescued and taken to safety!

When they returned after the war, in many cases their Danish neighbors had watched over their homes, watered their plants, and fed their pets. It is such an inspiring story, one of the few such stories to come out of the horror of the Holocaust.

One of the wonderful Danish people we met was Henrik Tuxen. He asked how he—as a lover of Israel working in various ministries in Denmark—can be an ambassador for Israel, in the context of rising anti-Israel sentiment in Denmark and Europe.

I shared this with him:

The world should know that Israel gives Arab citizens a high degree of democratic opportunity.

I’m not saying the State of Israel is perfect in the way it treats its Arab citizens (or in any other way, for that matter). However, if you asked an Israeli Arab if he or she would like to move to one of our neighboring Arabic countries—like Egypt, Jordan, Syria or Lebanon, or even to the Palestinian Authority here in the “West Bank”—what do you think their response would be? Surveys confirm that the vast majority of Israeli Arab citizens would prefer to live under Israeli rule and not under the Palestinian Authority. 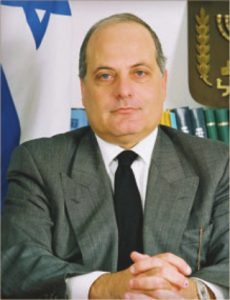 Very recently we personally observed a hearing in the Supreme Court of Israel. One of the three justices was a Christian Arab— sitting as a judge in the highest court in the Land!

If you visit our local Galilean hospital you will find that a very significant percentage of the doctors are Arabs, around 40%.

Around half of the pharmacists in Israel are Arabs. I know my local pharmacist is.

The Arabs in Israel have political parties and elect members to the Israeli parliament, the Knesset. Every citizen has the right to vote, including the Arabs, both Muslim and Christian (these constitute about 20% of the Israeli citizens).

Freedom of every religion is protected in Israel, unlike in many Muslim countries.